"Trust your own inner path before any external teaching or teacher."

WHO IS THIS ARCHETYPE?

This is the Archetype that gives voice to received insights. The Translator's recognition depends entirely upon the timing of when it shares, and its use of language. It has the potential ability to put language around the concepts that come out of Archetype 43. The purpose of the Translator is to express individual insights that bring new and innovative ways of understanding into the collective.

If the Translator isn’t able to explain its insights clearly, it will always drive people away.  When it learns the right timing for when to speak and when not to speak, it will receive the recognition it deserves. The Translator must learn to eliminate intolerance by waiting to be invited to share its knowing clearly.

The Translator can be as much of a game-changer as Archetype 55, as it recognizes that all foundations can be split apart with new thoughts and awarenesses. The real power to transform and serve as a catalyst for evolution lies in the capacity to wait for correct timing.

What this Translator archetype says and does can bring dramatic change to your world. It tends to shake life up and instigate new perspectives. Its grand statements can come right out of the blue, making everyone pause for a moment and take note. The Translator is a proponent of radical measures, eager to see people thinking in new ways and embracing new approaches.

This archetype assimilates by stripping away what is not useful anymore. This can bring about an entirely different view of the world in an authoritative manner. As a voice, it speaks with the plainspoken tone of “I know...” eager to bring about change or add a fresh dimension. The Translator’s knowing may sound very knowledgeable and it’s not based on outside logic or facts. It’s an inner knowing carefully translated to make sense to the listener.

When its translation is relevant to the needs of the moment, this archetype is able to express profound insights and truths in a way that is easily assimilated by others. The main gift of the Translator is that it can split apart the big ideas of Archetype 43 into small bits that can be effectively articulated.

The Translator has learned to keep it simple and to slow it all down. It knows that it doesn’t have to solve every problem and this is precisely how it finds its relaxedness. Its knowing and heart lead the way towards simplicity in everything it says and does.

Giving voice to something new

Making the internal knowing digestible for others

Frustration when not understood

Perceived as Freak or Genius

Depending on how acute the level of fear you have, you will probably never express what you really think. Language will be held back, either through internal repression or external oppression. If you are choked by fear, you cannot speak clearly, if at all, and so you slowly learn to not say what you really think, instead lapsing into silence or superficiality. This is particularly true if you have very oppressive parents.

From the Gene Keys

It’s hard for you to stop talking and, because there is a general mis-timing within your neurology, you create enormous interference and fragmentation wherever you go. You always say the wrong thing, or you say the right thing but at the wrong time. You tend to talk in circles, over-explaining everything in an unconscious attempt to conceal the anger that lies within you at not being understood on a much deeper level. You spend an enormous amount of energy trying to be heard only to find that you are constantly pushed away.

From the Gene Keys

Are you able to share what you are really feeling and thinking?

Do you have the courage to hold on to a vision, even when no one else gets it?

Are you able to translate your inner process in words that someone else can understand?

Is it okay for you to be on your own with your intention?

How do you feel about not fitting in?

Do you often talk too much or say the wrong thing?

Do you know how to be silent, even when you have something to say?

What does “right timing” mean to you?

How do you relate to complexity and simplicity?

Is there any clutter in your life that needs to be cleared out?

Do you have too little or too much spontaneity in your life?

I trust my inner knowing

I trust my vision

I trust my timing

I trust I will be heard

I trust I can contribute

and make the world a better place

"To follow the mystical path is to surrender utterly to that which is within you, no matter where it leads you."

"Like quicksilver, I bind myself to you and find my way into the cracks within your mental structure."

"The power of simplicity creates efficiency wherever I go."

BELLA EXPLAINS THE TRANSLATOR AND WEAVES THE TEACHINGS FROM THE GENE KEYS AND HUMAN DESIGN.

If you would like a chance to have your chart read LIVE during the transits, comment on the Illuminated Archetype thread in Bella or Ashley's Facebook groups.

She has the Translator Archetype in her Conscious & Unconscious Neptune

Your Life by Design

You can have a FULL chart reading too! Book an Illuminated Design LIVE Reading with Bella and Ashley

"I communicate precisely, clearly and with great economy."

All four fingers rest on the thumb and the two hands point upward like buds: Quintessence of life and death are through each other. "Whenever this 23rd Shadow speaks, it complicates the situation."

“If you love simplicity, you will manifest it around you."

“The sheer beauty of the ultimate realization is that it is always discovered by mistake."

Discover the 23rd Gene Key from its original source. 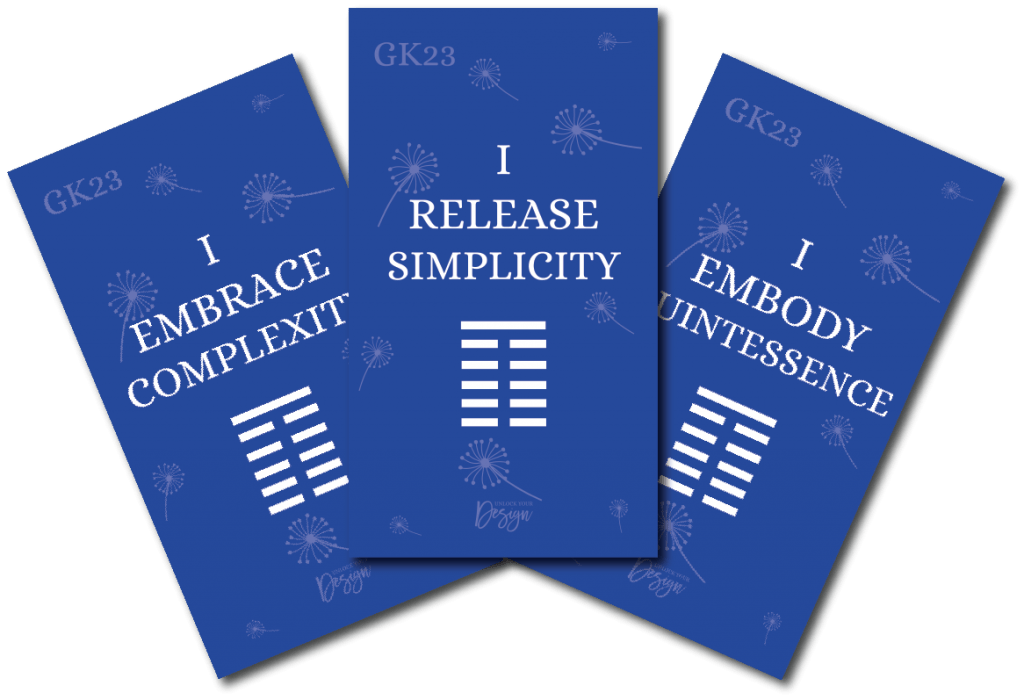 EMBRACE your shadows. Sometimes our shadows just need attention and love to be transformed. An embrace is a hug. We pull it in; we do not push away. Hug until it blends and transforms inside of you, revealing the GIFT within. The gift is then RELEASED within you and outside of you. You EMBODY the Siddhi when this essence vibrates through your whole being.

Use these phone backgrounds as a reminder for you through the transit.

BECOME THE TRANSLATOR WITH THESE RESOURCES

"Things that you thought were problems dissolve in my  presence, and through my insight and clear language, difficult things become easy."

Come for the transformation, stay for the community.

Together we uncover the mysteries of your genetic blueprint, mirror each other and share tools and practices to help you embody your own truth.

Do you want to go deeper and understand YOUR specific Blueprint (not just what's in transit)?

Travel into the depths of your design and learn how to align with and emBODY your genius to unlock magnetism and impact in your life.

"With me you will have to dig deep within yourself and revel in that true quintessence that only you can recognize."

Let’s extract the SIMPLICITY from Complexity

The Alchemical Quintessence – from Complexity to Simplicity

RETURN TO THE 64 DOORS

If you enjoy what we are doing here at Unlock Your Design and the 64 Doors, please consider making a contribution to our business. Be it $1 or $100, you will help sustain our mission of bringing these archetypes to life. Let us expand. Thank You.